This year’s top-ranked retailer is Thorntons, which owns and operates 192 stores in Florida, Illinois, Indiana, Kentucky, Ohio and Tennessee. In addition to achieving the top overall rating in total customer satisfaction in the survey, the Kentucky-based company also garnered first‑place ratings in both service quality and value.

Wawa rated second overall with customers, capturing top marks for convenience and ease, as well as for its loyalty and rewards program. The company also rated first in total satisfaction in the Mid‑Atlantic and Southeast regions. Rounding out the top five in terms of total satisfaction were RaceTrac, QuikTrip and Sheetz. 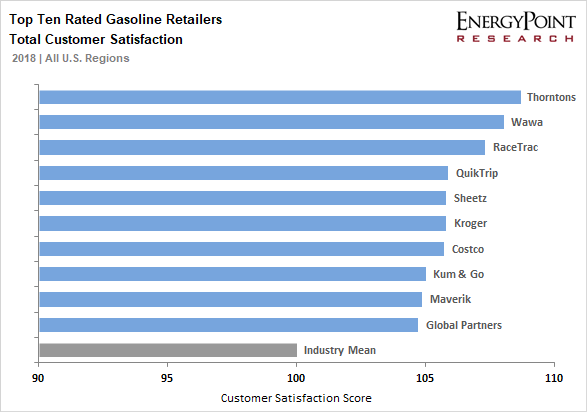 “For the last fifteen years, EnergyPoint has tracked customer satisfaction across key segments of the oil and gas supply chain. For the third year in a row, customers indicate that their experiences at the retail pump exceed those of other segments of the industry,” noted Doug Sheridan, Managing Director and Founder of EnergyPoint Research. “The fact of the matter is the top‑rated companies are more than just refueling posts for customers‑they are favored destinations that Americans increasingly rely upon to power their busy lifestyles.”

The online survey, which was independently conducted by EnergyPoint Research in May and June 2018, focused on customers’ satisfaction with major U.S. gasoline retailers across a range of attributes and categories. In addition to rating retailers on an overall basis, the survey ranks companies, where eligible, within seven U.S. regional markets. A total of 37 companies received the minimum number of evaluations needed to be included in this year’s rankings. 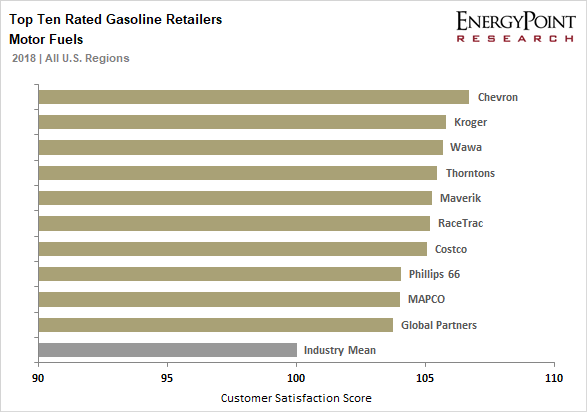 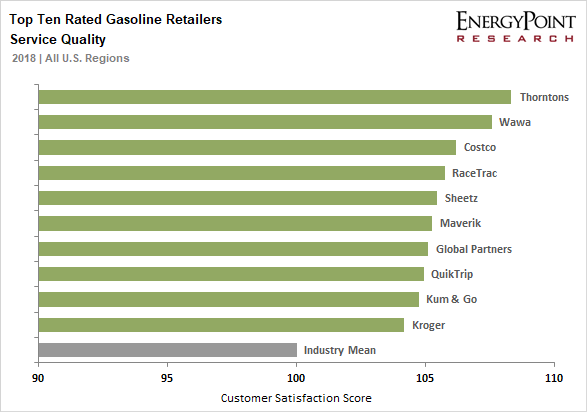 Listed alphabetically, companies rating first in at least one category in the survey include:

“Despite the loss of several competitors to consolidation, the number of retailers rated in this year’s survey is the highest ever,” noted Sheridan. “Circle K, Corner Store and Holiday Stationstores were consolidated into Alimentation Couche‑Tard for purposes of the study. However, several new companies were added to the rankings, including Andeavor‑affiliated stores, CEFCO, Global Partners‑affiliated stores, MAPCO and affiliates, Maverik and Thorntons. This expanded list better captures the range of companies active in the highly competitive space.”

The survey’s results reflect the evaluations of more than 26,000 individuals between 18 – 75 years of age across the U.S. Lower‑48 States, with a total of 37 retailers receiving the minimum number of evaluations needed to be included in the final rankings. For those categories and retailers in which ratings existed, scores from 2016 and 2017 surveys were included in this year's category‑winner calculations at lesser weightings than 2018 evaluations. In no case were 2016 – 17 ratings assigned a weighting of more than 20 percent for purposes of calculating final ratings and rankings.

Survey respondents were asked to rate retailers with which they have had significant experience as a paying customer within the last three months in one of seven selected U.S. regions. The survey, which included more than 30 questions, focused on features and attributes shown to drive satisfaction among customers of gasoline retailers, including: pricing and value, service quality, ease and convenience, motor fuels, food and merchandise, store facilities, loyalty and rewards programs, commercial and fleet programs, and highway and distance travel. U.S. regions covered in the survey include the Mid‑Atlantic, Midwest, Southeast, Southwest, Northeast, Northwest and West.

Full survey results are included in EnergyPoint’s 2018 Gasoline Retailers Ratings & Analysis Report. Purchase options include detailed ratings for all 37 companies by region, as well as analysis of overall trends and drivers of customer satisfaction in the gasoline retailing space.

EnergyPoint Research conducts independent research regarding customer satisfaction in the global energy industry. Founded in 2003, the firm publishes its closely watched annual customer satisfaction ratings and rankings in several segments, including gasoline retailing, midstream services, and upstream products and services. For more information concerning EnergyPoint Research, its independent surveys or suite of research offerings, visit the company’s web site at www.energypointresearch.com, contact the firm at info@energypointresearch.com or +1‑713‑529‑9450, or click on the links below.